Jenna was on BBC Radio 2 this morning with Victoria co-star Tom Hughes,I’ve added images of her during the show a photoshoot which was taken during the interview and leaving the studios! Enjoy!

I’ve added screencaps of the latest episode of Victoria “Brocket Hall” my favourite episode yet! Can’t wait for the next episode! Enjoy the caps!

I’ve added screencaps from the second episode of Victoria “Ladies in Waiting” such an incredible episode,enjoy viewing caps!

I’ve added episode stills of Victoria episode 4 to our gallery,enjoy viewing them!

I’ve added stills of the upcoming Victoria episode 1×03 Brocket Hall to our gallery,enjoy!

I’ve added screencaps of the first episode of Victoria,it was amazing! what did you guys think? The ratings were amazing 6.1 of us brits tuned in to watch it! Keep this up,anyway enjoy the screencaps of ” 1×01-Doll 123“

Playing Queen Victoria in a new eight-part ITV drama has been “such a gift”, actress Jenna Coleman has revealed.

The former Doctor Who star said the role had been “impossible to turn down” – despite previously saying she wanted time off from TV series.

“When I left Doctor Who the first thing I said was, ‘I just don’t want to do a series for a while,'” the 30-year-old said at a press event in London. 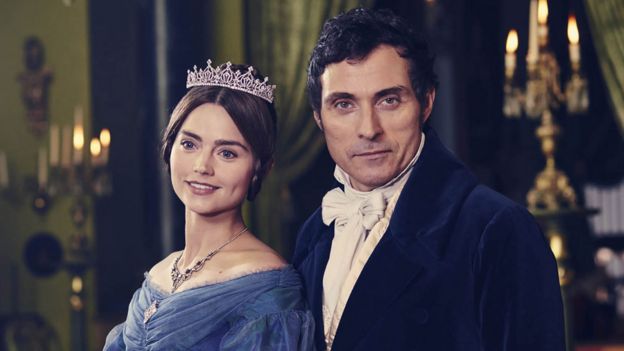 Comparisons are already being made to Downton Abbey, which came to a close last Christmas after six years on air.

One aspect of the role that Coleman had to grapple with was the blue contact lenses she was required to sport to emulate Victoria’s natural eye colour.

“Any of the portraits you see, the first thing you see are her eyes,” said the actress, adding she went through “in the region of about 70 pairs” during shooting.

The first series of Victoria charts the early years of the queen’s reign and her courtship with Prince Albert, played by Tom Hughes.

Coleman made her first appearance in the BBC’s Doctor Who in 2012, going on to play the Doctor’s companion Clara Oswald in three series