Welcome to Adoring Jenna Coleman at jenna-coleman.org. Your leading source dedicated to gorgeous and talented Jenna Coleman. Our goal is to bring you all the latest in Jenna news, including her upcoming movies and more. We bring you all the oldest and newest images from her movies, candids, appearances captures, magazine scans and more... you name it you have it! If you'd ever like to donate any picture, send us an email, you will receive full credit for your donations! Whatever you're here for, we hope you find something to interest you and hope you choose to return soon.
Jenna Coleman attends the Victoria&Albert Summer Party

On Wednesday (June 19) Jenna attended the Victoria&Albert Summer Party, which took place at the V&A museum in London.

Gallery Update × Public Appearances
By admin × Comments are off
Jenna Coleman: the Victoria star on her stage debut in All My Sons

THE TIMES – “I have no idea what I’m doing,” says Jenna Coleman of making her belated professional stage debut in Arthur Miller’s All My Sons. OK, in part this is self- deprecation: the 33-year-old star of three seasons of Victoria, three seasons of Doctor Who and all sorts of other acclaimed television shows over the past ten years is chuckling as she says it. She knows the reviews have been good, knows the show gets standing ovations at the Old Vic every night.

It’s also a sincere suggestion that she feels as if she has been winging it all her professional life. When she was in her teens in Blackpool, beavering away in a touring theatre company set up by an enterprising teacher at her school, she thought she knew how her career would go. Drama school, small parts here and there, a steadily growing confidence and profile to match it. Instead, first she was rejected by drama schools, then she was scooped up for a role in Emmerdale. And Emmerdale led to pretty much uninterrupted, high-profile television work for the next 15 years. 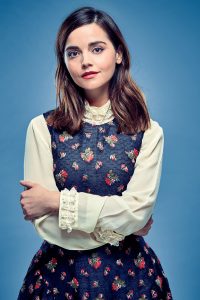 On May 11,  Jenna Coleman was guest at Graham Norton on BBC Radio 2 where she talked about Victoria and the theatre production she stars in All My Sons.

You can also listen to her interview on the BBC Radio 2 website.

On April 23, the press night for Jenna’s theatre work All My Sons happened. Apparently the play is currently a success and Jenna also got into the heart of her co-star Sally Field, who said to The Evening Standard:

“She was stunning. We hold hands backstage and she helps catapult me where I need to go and I hope I help her. She is a stunning actress and was as solid as a rock for me.”

For the occasion Jenna was wearing a vintage Chanel champagne silk pleated dress from 1988 collection with faux-pearl drop hoop earrings by Simone Rocha. (Thanks to Jenna Coleman Closet for the infos!) 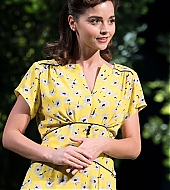 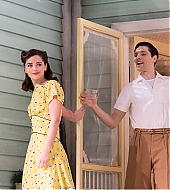 STELLA MAGAZINE – As Jenna Coleman returns to our screens as Queen Victoria, she talks to Guy Kelly about setting up home with her on- and off-screen consort, extending her realm to the London stage, and why she loves playing pregnant

It’s hardly surprising – after playing her through seven children, three prime ministers, a war, a famine, a cholera outbreak, an assassination attempt and a coronation – that occasionally, as Jenna Coleman goes about modern life, she finds herself thinking, ‘What would Queen Victoria do?’

‘I really do. She was very up on everyone else’s business. When she was young, she kept a journal knowing it would be read, and some of the entries are literally just, “Woke up at nine, dinner…

On Friday, April 06 – Jenna was guest at The Jonathan Ross Show where she promoted the upcoming third season of Victoriaand talked about Doctor Who.

On April 02, Jenna was guest at The Zoe Ball Breakfast Show on BBC Radio 2. While there she talked bout reprising her role of Queen Victoria for series 3 of Victoria and her upcoming role on stage in Arthur Miller’s play All My Sons opposite Sally Field and Bill Pullman.