Welcome to Adoring Jenna Coleman at jenna-coleman.org. Your leading source dedicated to gorgeous and talented Jenna Coleman. Our goal is to bring you all the latest in Jenna news, including her upcoming movies and more. We bring you all the oldest and newest images from her movies, candids, appearances captures, magazine scans and more... you name it you have it! If you'd ever like to donate any picture, send us an email, you will receive full credit for your donations! Whatever you're here for, we hope you find something to interest you and hope you choose to return soon.
Home  ›  News  ›  Jenna Coleman  ›  Jenna in Observer Magazine!
Jenna in Observer Magazine!

“My contract came up last year and I decided that because I’d only done one series with Peter Capaldi, I wanted a bit more time to explore that relationship.Also, he’s the Gandalf of Doctor Who!

He seems to have that mythical thing about him, and we’re great buddies behind the scenes.You pick up a script and get a sniff of where things are going, but any speculation Peter and I have, the story never goes in that direction.” 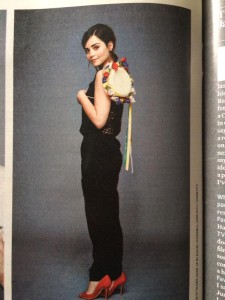 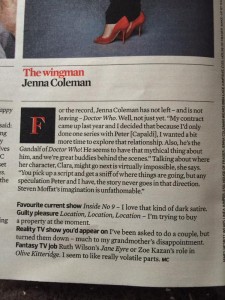