Welcome to Adoring Jenna Coleman at jenna-coleman.org. Your leading source dedicated to gorgeous and talented Jenna Coleman. Our goal is to bring you all the latest in Jenna news, including her upcoming movies and more. We bring you all the oldest and newest images from her movies, candids, appearances captures, magazine scans and more... you name it you have it! If you'd ever like to donate any picture, send us an email, you will receive full credit for your donations! Whatever you're here for, we hope you find something to interest you and hope you choose to return soon.
Home  ›  Jenna Coleman  ›  Biography
Biography 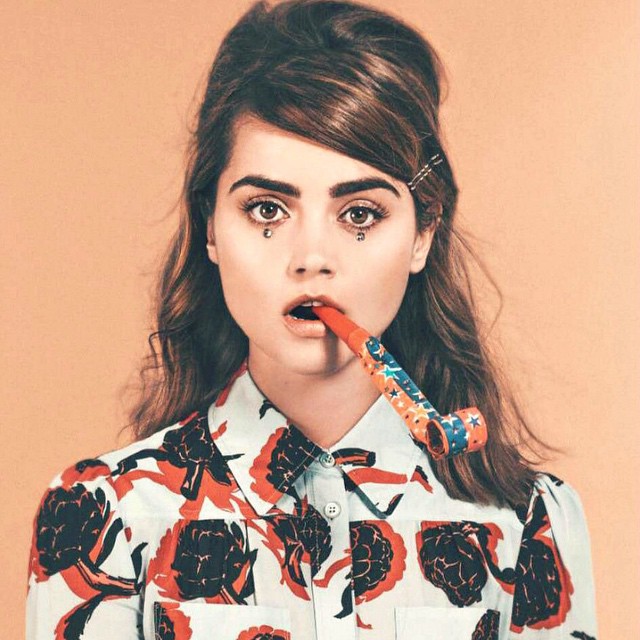 Coleman was born in Blackpool, Lancashire,[7] the daughter of Karen and Keith Coleman. She has an older brother named Ben. She attended Arnold School, where she was head girl. She has stated that she regrets not having a conventional university experience. While at school, Coleman was a member of the theatre company In Yer Space, with which she performed in the play Crystal Clear at the Edinburgh Festival. She won an award for her performance, and the play was also received favourably. In an interview with the Radio Times in 2015 she revealed that her grandmother had named her Jenna after the character of Jenna Wade played by Priscilla Beaulieu Presley in the 80’s hit American drama series Dallas.

In December 2010, it was announced that Coleman would be playing Susan Brown in a BBC Four television adaptation of the John Braine novel Room at the Top. The adaptation was originally intended to air in April 2011, but this was cancelled due to a rights dispute between the production company and Braine’s estate. The dispute was resolved by 2012, and the show aired in two parts on 26 and 27 September 2012. In 2011, she made her feature film debut in Captain America: The First Avenger. She also landed the part of Annie Desmond in Julian Fellowes’ four part mini-series Titanic, describing her character as a “cheeky little Cockney” and “the Eliza Doolittle of the ship”.

Coleman provided the voice for the character Melia in the English dub of the 2011 video game Xenoblade Chronicles. In 2012, Coleman was cast as Rosie in Stephen Poliakoff’s original drama series Dancing on the Edge, which follows the fortunes of a black jazz band in the 1930s. The show aired on BBC Two in February 2013. She starred as Lydia Wickham in the adaptation of Death Comes to Pemberley. The three episodes were shown on BBC One during Christmas 2013.

In April 2015, it was announced that Coleman would be playing the role of Katrina Clark in the film Me Before You, which was released on June 3, 2016. She made a guest appearance in the episode “Earthbreaker” of the animated science fiction show Thunderbirds are Go.

In December 2017, it was announced that Coleman would be the narrator for a Royal Caribbean UK advertising campaign. On 8 January 2018, Coleman was confirmed to play Joanna in the four-part BBC drama The Cry, an adaptation of the 2013 novel by Helen FitzGerald.

On 21 March 2012, Doctor Who producer Steven Moffat confirmed at a press conference that Coleman would play the companion of the Eleventh Doctor (Matt Smith). Moffat chose her for the role because she worked the best alongside Smith and could talk faster than he could. She auditioned for the role in secret, under the pretense of auditioning for Men on Waves (an anagram for “Woman Seven”: she would first appear in the show’s seventh series).

Although originally announced as beginning her run as companion in the Christmas special in 2012, Coleman made a surprise appearance on 1 September 2012 in the first episode of the seventh series as Oswin Oswald, a guest character who dies at the conclusion of the episode. Coleman subsequently debuted as a series regular in the Christmas special episode “The Snowmen” as Victorian governess and barmaid Clara Oswin Oswald; like Oswin Oswald, she died. At the end of that episode, Coleman is seen playing a third version of the character, a resident of contemporary London named simply Clara Oswald. Beginning in “The Bells of Saint John”, this version begins her travels as the Doctor’s regular companion, including after his regeneration into the Twelfth Doctor, played by Peter Capaldi, in the 2013 Christmas special episode “The Time of the Doctor.” In the 2014 Christmas special episode “Last Christmas”, it was revealed that Coleman would remain in the role of Clara for Series 9. However, the ninth series was her last, as Coleman had decided to leave the show to take on a role as Queen Victoria in an ITV production. In “The Zygon Invasion” and “The Zygon Inversion”, Coleman also played the role of Bonnie, the Zygon leader who took the form of Clara Oswald. She returned to the show for Twelfth Doctor’s last episode “Twice Upon a Time” where she made a cameo appearance.

As of 12 May 2013, she began using the name Jenna Coleman professionally, with the shorter credit being first used when she appeared as a presenter for the 2013 BAFTA Television Awards, and it was made official on 7 June 2013 when she was introduced with the shorter name during a visit to BBC Broadcasting House by Queen Elizabeth II. She was first credited on screen as Jenna Coleman in Doctor Who Live: The Next Doctor, which aired on 4 August 2013.

In 2016 Coleman starred in ITV’s eight-part drama following the reign of the British monarch and Empress of India, Queen Victoria. The actress confessed that she was not totally informed about Victorian history, but researched the role. When interviewed for BBC Radio 4’s Woman’s Hour, Coleman expressed her admiration for the monarch.

She argues that this role meant she was able to break out of her supposed ‘box’ as a northern working-class character that Emmerdale put her in. Victoria premiered on 28 August 2016 on ITV, and in September 2016, ITV renewed Victoria for a second series. A Christmas special for 2017 was also commissioned and a third season was announced in December 2017.

Coleman has been involved with charity work in South Africa raising awareness of HIV with One To One Children’s Fund, for which she is an ambassador. She is also an ambassador for Place2Be, a charity providing emotional and therapeutic services in schools