Welcome to Adoring Jenna Coleman at jenna-coleman.org. Your leading source dedicated to gorgeous and talented Jenna Coleman. Our goal is to bring you all the latest in Jenna news, including her upcoming movies and more. We bring you all the oldest and newest images from her movies, candids, appearances captures, magazine scans and more... you name it you have it! If you'd ever like to donate any picture, send us an email, you will receive full credit for your donations! Whatever you're here for, we hope you find something to interest you and hope you choose to return soon.
Home  ›  News  ›  Articles  ›  Jenna Coleman for Wonderland Magazine
Jenna Coleman for Wonderland Magazine

Allow me to introduce the “impossible girl”. She’s visited hundreds of galaxies with a Time Lord and ruled the British Empire, dealt with dukes and Daleks (I’ll leave you to decide which are worse), but right now the most impossible thing she’s facing is trying to find somewhere to chat to me on the phone without cracking up the people around her. “Sorry!” She laughs when we finally connect. “You just caught me in the car with my driver and I knew he’d just giggle at everything I’m saying!”

Of course, the girl in question is Jenna Coleman, who obtained the tagline from her role as the Eleventh Doctor’s companion in the beloved BBC series Doctor Who. Accompanying both Matt Smith and Peter Capaldi, Jenna rose to fame as Clara Oswald, the witty school teacher with the ability to charm alien life forms in numerous universes.

The chance to escape to different worlds has always appealed to Jenna and exploring alternate realities is what first made her want to get into acting. “I remember reading Enid Blyton and loads of books and their worlds becoming very vivid in my head,” she recalls. “I just remember being really, really young and for some reason it always just felt very simple. Acting was always what I wanted to do, it was more the ‘how’ that was always the more complicated thing.”

Putting in the hard work to make the “how” happen, Jenna scored her first role in Emmerdale in 2005, before getting the coveted companion role in 2012. Stepping into such a popular fandom was initially quite intimidating, but Jenna has since established a legacy as one of the most adored of the Doctor’s partners (soz, Martha). “I’ve never done anything where you’re the only new cog in a very oiled machine,” she explains. “It’s like you’re literally the only newbie on your own, which is quite a strange thing. You kind of have to hop onto a train that’s already full-speed ahead.”Rapping up her final season as Clara, Jenna was thrust straight into yet another world. This time: Victorian England. Taking on the starring role as Queen Victoria in the acclaimed ITV series Victoria, it was a bit of an adjustment from a Cyberman fighting sidekick. “I had like three weeks to prep so it was a really hard one actually,” she remembers. “And there was so much research material!”Doing her homework, Jenna dove into Queen Vic’s diaries to try and get into the mindset of a young woman entrusted with ruling an entire empire. “There’s so much that people think they know about her,” she tells me. “You’ve got the diaries, you’ve got the historical biographies. You’re taking someone that we all think we know so well and we know so iconically from portraits and history. I’m just trying to really get behind that and bring her to life – really peel away the layers and get to know her. It was a challenge but I also love it.” She laughs. “I didn’t think I liked her at first! I love her, but I don’t always like her. What’s amazing is that now we’re a couple of series in, I can keep going back and reading her diaries. I feel like I keep getting to her more and more and she’s a bit of a companion now.”

Currently heading into their third series, Jenna’s brief break from resuming Victoria filming wasn’t as relaxing as one might expect. Heading to Australia in February, instead of having some well-deserved chill time on the sunny beaches, she got straight into her most challenging role yet.

Starring in the BBC’s upcoming psychological thriller The Cry, Jenna plays the lead role of Joanna, a young mother who travels to Australia with her newborn son and slightly shitty husband amidst a custody battle over her husband’s daughter from a previous marriage. Once they’ve landed, all seems to be going okay when suddenly her life is thrown into disarray after her son disappears. Based on the Helen Fitzgerald novel of the same name, if you’ve watched the trailer, you’ll know that it’s destined to be one of those shows that’ll have you glued to your television screen, barely breathing, with twists and turns that will leave you speechless.

Shooting between Oz and Glasgow, it’s set to come out on September 30th, filling that inevitable Bodyguard-shaped hole within our lives. Quite a difficult filming process, the show runs on two different timelines − one taking place when the baby goes missing and the other in the present day at a trial, although “a trial for what?” is a question I’m yet to learn the answer to. “We kept calling it ‘going down the vortex’ because you’re shooting all these timelines and obviously it’s a psychological thriller so there are certain aspects of what you can give away and when.” Jenna explains. “There’s a certain version which kind of keeps everyone at arm’s length a little bit, so you’re never giving too much away at once.” She pauses. “This will all make sense once you’ve seen it, but, oh my god, in terms of playing it, it was the most narratively complicated job I’ve ever done!”

Not only were the timelines hard to grasp at first, but Jenna originally found her role quite struggling too. “I had real issues with the idea of playing a mother with issues. That would be fundamentally something that I maybe wouldn’t be able to do justice because I’m not a mother,” she discloses. “It was hugely challenging. But to be honest, a lot of my friends have got new babies and a couple of them sent me the most incredible emails. I spoke with them and got really amazing, and searingly honest, details about the realities of being a new mum. It’s the most beautiful thing in the world, but just because it’s so beautiful it doesn’t mean it doesn’t come without questions about your own identity and loneliness. I think it was a really interesting way to explore post-natal depression in a way that I don’t feel I have ever really seen very much on the screen.”

Her portrayal of a struggling mother is, at many times, difficult to watch. In the first episode, she’s on the 24-hour-long flight to Australia, screaming baby in arms, husband fast asleep, getting disapproving looks from other passengers as she frantically tries to settle her son. It’s a moment that I’m sure many have been a part of, I know that I’ve given my fair share of eye rolls to crying children on flights before, and it’s this aspect that The Cry wants to tap into. “It has a lot of questions,” Jenna muses. “It questions our society about the pressures on new mums. But also the pressure of the media, and how media can spin a version of the truth.”

The latter is in response to the “whodunnit” aspect of the show, the twist in the first episode which leads you to believe that maybe the baby hasn’t only gone missing. “I guess it’s the funny thing of going through one of the most extreme emotional experiences of your life at the same time as being under this media scrutiny,” Jenna details. “Those two things coinciding and happening at once is really quite an interesting angle to look at psychologically. And an interesting story to tell.”

“Who do you think did it?” She asks, cueing me to launch into the various theories that are spinning around in my mind. Is it too obvious to be the ex-wife? Or how about the struggling young mum? Maybe it’s the husband’s daughter who is secretly jealous of her dad moving on and creating a new life? Maybe it’s someone else altogether? “That’s what I felt like reading it!” She laughs. “I felt like I didn’t quite know what was going on. It was leading me in different directions and I just kept turning the page!”

What’s not up for debate though, is the fact that Jenna is breathtaking in the show and her portrayal is sure to get her even more critical acclaim. For the “impossible girl”, it really seems like she can do anything. 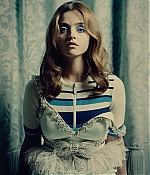 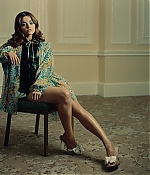 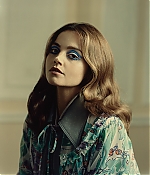