Doctor Who News Press Archive
How To Get Jenna Coleman’s Beautiful Beauty Look From The BAFTAs
admin • February 20, 2015 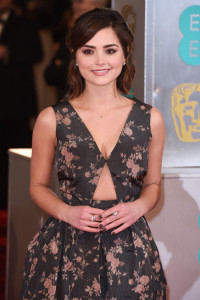 At the BAFTAs Lancôme’s team created the makeup looks for 150 faces. It was a military makeup operation, involving a LOT of lipstick – to be precise 300 Rouge in Love lipsticks and over 150 combinations of foundation.

One of those faces was Dr Who’s Jenna Coleman who wore a beautiful floral Rochas gown with a triangle cut-out above the waistline. In between chatting about Eddie Redmaye, Jenna told us that she loved how it was comfortable and modern, while stile making a statement.

We caught up with her makeup artist Shehla Shaikh to find out how she created the look using Lancôme products. She told us: ‘We wanted to go for a softly smoky eye that defined but didn’t take away too much from Jenna’s modern, romantic Rochas gown.’ Here are the steps to getting the look…

4. For added definition she used a smudge of Brown Kohl Pencil along the lash-line before coating the lashes in Grandiose mascara.

5. Lips were kept natural with a modern nude tone created with a base of 211 Lip Pencil followed by 200B Rouge in Love lipstick to give a subtle sheen.

You can read the full article here